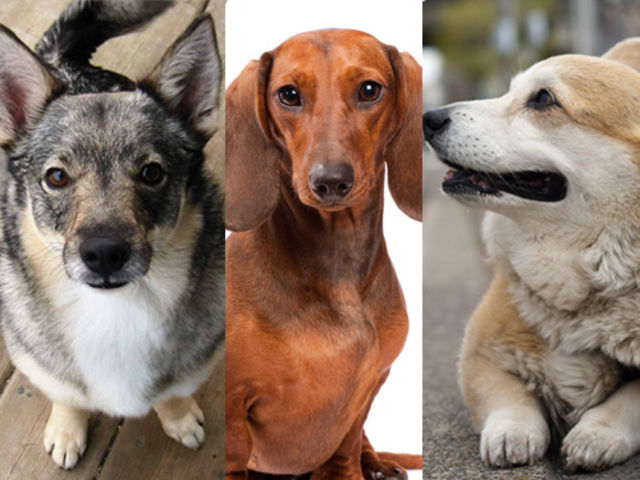 A quick Internet search for “dwarf dog breeds” will not result in any single dwarf breed. Unlike miniature horses, donkeys, goats, and pigs, there is not one particular breed of dog who is more susceptible to dwarfism than other. Rather, there are dozens of dogs with varying types of dwarfism—adopting a pygmy dog is as normal as, well, adopting a dog! Dwarfism in these animals is often characterized by long bodies and short legs—most dogs that exhibit these physical traits are, indeed, pygmy dogs. If you can’t think of any, here’s a quick list to boost your brainstorming.

Dachshund: Dachshunds are the epitome of small dogs with short legs. Selectively bred, this breed was originally intended to flush out badgers. Their short legs allowed them to crawl into underground dens. All Dachshund variations are achondroplastic, meaning they have a form of short-limbed dwarfism.

Corgi: Corgis were originally bred as cattle herders. People selectively bred the dogs to reduce their leg length which worked to prevent them from getting kicked by the cattle. While these breeds are rarely seen herding cattle these days, their pygmy history has made them one of the cutest dogs around.

Pug: Pugs have shortened legs and a shortened muzzle. This is the result of two separate types of dwarfism. The breed was brought to Europe from China in the 16th and 17th centuries, where breeders continued to strategically breed the dog to improve its aesthetic appearance.

Bulldogs: While relatively large, bulldogs are true dwarf breeds. They have flattened, frog-like hindquarters and a shortened muzzle—tell-tale signs of two types of dwarfism (achondroplasia, specifically).

Basset Hound: The Basset Hound is considered to be the dwarfed version of a Bloodhound. Smaller than the latter, this scent hound is a French breed. In fact, its dwarfism is in the name: Basset comes from the French word “bas,” meaning “low.”